CAN PROBIOTICS PREVENT FLU AND COLDS? 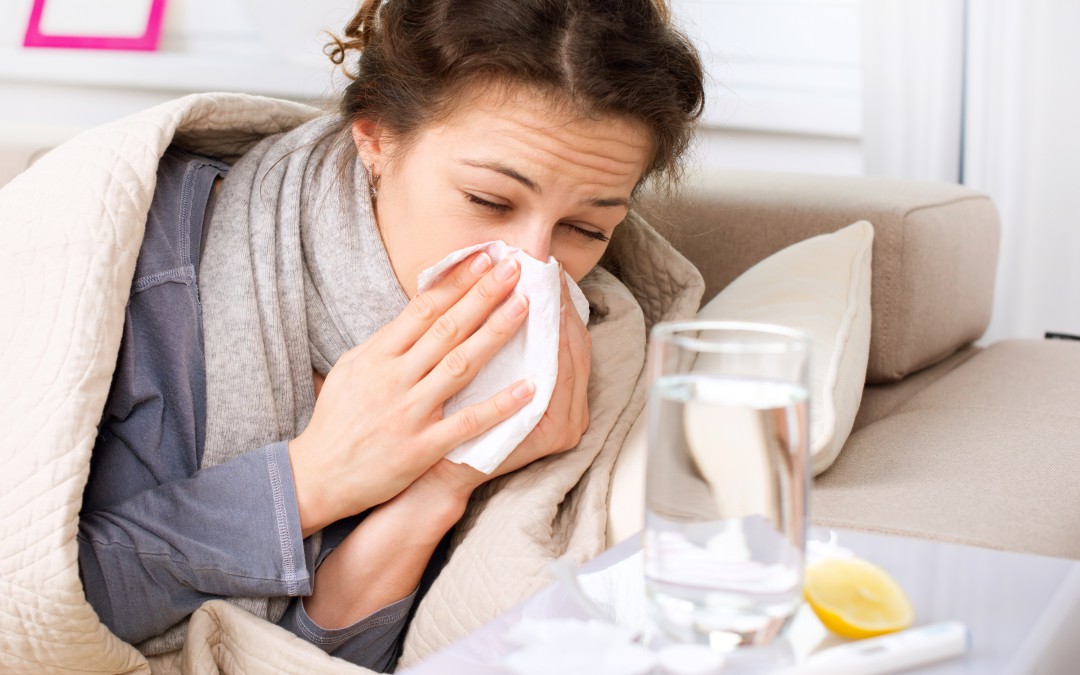 During the 2013-2014 winter, my family accounted many episodes of Respiratory Tract Infections (RTIs). I, my husband, and both my daughters were experiencing recurrent RTIs, and this saga lasted for about 6 months. My older daughter missed about 60% of her daycare days and my younger one about 90% of daycare because of RTIs. It was a tough burden (physically, emotionally and financially) for me and for my husband. Luckily, the last winter of 2014-2015 was much better; my daughters were only sick a few times and it was quite mild. Having the entire family suffering from recurrent RTIs, it was a wake-up call for me to look for ways to improve our health. The changes we have made were mostly around our diet and included the consumption of probiotic supplements, more fermented food, more vegetables, more salads, more fiber, more bone broths, less sugars, reduced intake of diary milk products, reduced consumption of wheat and gluten, and no processed food.

Even though it’s not the season of colds and flu now, I want to give some attention to “RESPIRATORY TRACT INFECTIONS AND PROBIOTICS”. RTIs typically include cold, upper respiratory tract infections, influenza-like illness and flu, the majority of which is caused by a virus.  Associated symptoms include runny nose, sneezing, sore throat, cough, sometimes fever and may last between 5 to 10 days. Children, on average, suffer from 6 to 12 RTI incidents annually, whereas adults average from 1 to 5 incidents. The management of RTIs typically includes the use of over-the-counter medications to relieve some of the symptoms.

The average cost of an RTI incident is by itself low, however the high incidence and recurrence leads to a high burden for the individuals affected, their families, health care practitioners and health care systems worldwide. High recurrences of RTIs affect the quality of life, leading to absenteeism at work or at school, and may involve extra costs such as hiring a baby sitter.

It is well known that a healthy, diverse and balanced diet, regular physical exercise and no stress contribute to one’s wellbeing, but what about probiotics? Can probiotics have an effect on the prevention, recurrence, duration or severity of RTIs?

BASED ON CLINICAL STUDIES…

Probiotics, in comparison to placebo, were shown to contribute to:

Below you can find a summary of results from relevant clinical studies.

Based on the results that probiotics may reduce the RTI duration, reduce absenteeism at work, at school, and reduce the use of medications, could the use of probiotics have an economical aspect in the management of RTIs? In order to answer these questions, a health-economic analysis (Lenoir-Wijnkoop et al)  was undertaken to determine the public health and budget consequences of a generalized probiotic intake in France. Scientists used the existing data from the two meta-analyses (Cochrane meta-analysis and YHEC meta-analysis) and applied it to the French population to estimate common RTI events, comparing subjects on and without a probiotics regimen. They looked at the cost savings related to the decreased incidence of RTIs, reduced number of sick days, number of antibiotics courses, sick leave days, and other related costs. Based on one of the analysis, authors estimate that probiotics’ economic impact could save the society, during the 2011-2012 winter, €84.4 million according to the YHEC data, and €253.6 million according to the Cochrane data. The authors emphasize also that the incidence of common RTIs during the 2011-2012 winter was low compared to the average rate over the five last winters.

TO USE PROBIOTICS OR NOT?

This is the most important question for the consumer: should I use probiotics for the prevention and management of RTIs? And if yes, then which?

There is no wonder probiotic strain against all RTIs and no wonder probiotic strain that works in all individuals. Everyone’s gut microbial make-up is unique so the probiotics may have different impact. The clinical findings available now are certainly encouraging, but on the other hand, there are also conflicting results where the users seem not to benefit from using probiotics in the prophylaxis and the management of RTIs, such as in a recent study with Bifidobacterium animalis subsp. lactis (Hojsak et al). Therefore, all published data needs to be confirmed in larger and more homogenous study populations. There are differences in study designs, including the various numbers of participants, various group ages, different sex, and different durations of the studies, different probiotic strains given, and different probiotic preparations, at different concentrations and at different times. This heterogeneity makes definite conclusions and recommendations – on whether, when, which probiotic and at what dosage in management of RTIs – difficult. We need to have a better understanding of the effects of different probiotic strains in the prevention and management of RTIs, and more specifically on their immune-modulating potential.

I believe that if we gain more knowledge we will be able to select the most beneficial probiotic strains for the management of RTIs, based on their proven properties.

To help you to select appropriate probiotic strains, I list below the bacterial strains shown to have, to greater or lesser extent, a beneficial effect in the prevention and/or the management of RTIs.

The study of Hojsak et al has shown that children (376 children) receiving probiotic Lactobacillus rhamnosus GG were at a lower risk of respiratory tract infections, gastrointestinal infections, vomiting episodes, and diarrhea when compared to the placebo group (366 children). Another study (Rautava et al) with infants (probiotic group) receiving daily formula supplemented with Lactobacillus rhamnosus GG and Bifidobacterium lactis BB-12 until the age of 12 months showed that infants in the probiotic group, in comparison to the placebo group, had lower incidence of RTIs, of ear infections (acute otitis media) and of antibiotic courses. Moreover, Japanese clinicians (Waki et al) demonstrated that schoolchildren receiving a probiotic drink containing Lactobacillus brevis KB290, for 2 months/5 days per week had lower incidence of influenza infections, with a more pronounced affect in children not vaccinated with the influenza vaccine. The authors of this study reported no significant difference in incidence of common cold or gastroenteritis between the probiotic group and the placebo group. Another recent study (Garaiova et al) investigated the efficacy of probiotic consortium containing bacteria (Lactobacillus acidophilus CUL21 and CUL60, Bifidobacterium bifidum CUL20, and Bifidobacterium animalis subsp. lactis CUL34) and 50 mg vitamin C for prevention of respiratory tract infections in 69 healthy children aged 3-6 years. Children received probiotic (28 children) daily or placebo (29 children) daily, for a period of 6 months. The authors observed significantly reduced incidence of upper RTIs, reduced numbers of days with upper RTI associated symptoms, and reduced absenteeism from preschool in the placebo group. In addition, children on probiotic and vitamin C regimen used cough medicines, painkillers, nasal sprays, and antibiotics for shorter periods of time than children receiving a placebo.

Furthermore, probiotics – in comparison to control groups – were found to contribute to the prevention and reduced rate of RTIs, also in reduced antibiotic use, as based on the Cochrane meta-analysis (Hao et al, updated Hao et al) of 10 clinical trials with 3,451 participants (infants, children, and adults). These results, however, did not find any effect on the duration of each single sickness episode. Yet, another data review (King et al) including a meta-analysis revealed the effectiveness of probiotics (Lactobacillus and Bifidobacterium strains) on the duration of RTIs in children and adults. The meta-analysis including 20 clinical trials revealed that participants receiving probiotic, in contrast to placebo participants, had shorter illness episodes by almost a day, had fewer abstinence days from work, school, or daycare.

The above studies report no adverse events associated with probiotic intake. Probiotics used in the studies – Lactobacilli and Bifidobacteria – are generally considered to be safe. Patients at high risk for a probiotic-induced sepsis include immunocompromised patients and premature neonates.